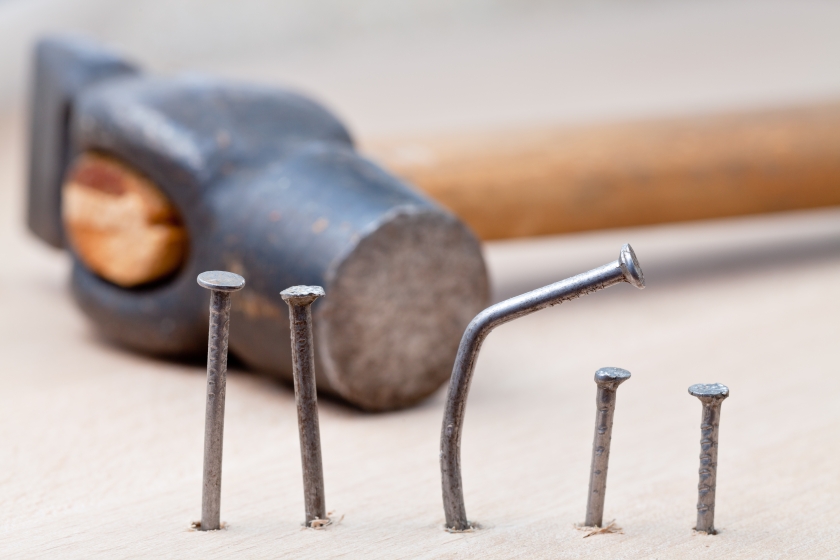 The machine running in my kitchen sounds like a jackhammer. I don’t want to be anywhere near it, and more importantly, I don’t want my six-year old near it. He’s home with a fever today, and we’re in his bed, upstairs, reading. “No,” I tell him, “we can’t go downstairs.” Not only is it too loud to watch TV in the family room, it’s too close to that machine. The man who’s running it says it has one hundred and twenty pounds per square inch of power. I’ve seen a man’s hand explode – along with an inflated tire – at half that pressure. The gun exhales – a quick hydraulic sigh – each time he plants a nail through the baseboard at the bottom of the wall. The contractor likes to talk – about his ex-wife, his girlfriend, his wine cellar, his brother’s backyard. He’s animated, and waves his gun as he describes the retractable awning he built last summer. What if, just for a second, he forgets that he’s holding it, and it fires. Bam! No, that could never happen. He’s an expert, he’s been doing this for twenty years, and has fired the gun safely tens of thousands of times.

John Hopper’s skin is bronze, except for the pale strip over which he normally wears his Ray Bans. His t-shirt has the logos of an NHL team on the front and a beer company on the back. His dark blue jeans are dusty, and there are slivers of wood scattered over his work boots. He works construction, and makes a little cash on the side doing odd jobs. This weekend, he’s building a deck with a friend of a friend. He’s been measuring two-by-fours, cutting them, and tacking them together with a hydraulic nail gun.

He’s sitting in a wheelchair, an embarrassed smile on his face. I tell him not to worry – that I’ve seen this type of thing many times before. “I was just walking with the gun in my hand,” he says, “and I’m not sure exactly how, but it went off.”

He puts his hand on his lower right thigh. “Right here,” he says.

I’ve probably seen this exact thing a half-dozen times. An accidental discharge, and the nail impales the skin. Sometimes it hits the bone, and sometimes it’s just soft tissue. Usually, if it hits the bone, it stops, and is pulled out before the patient comes to ER – if the patient even bothers coming at all. It’s when it misses bone – when there’s little to resist its force – that it goes right through, and that it needs to be extracted with freezing, and sometimes, very careful dissection.

John is pointing just above his knee. There’s a small hole – about a half-centimeter in diameter – through his denim.

“You pulled it out, right?”

I look closer. I brush a finger over the circular opening in his denim and realize it isn’t an opening at all; it’s a nail-head that’s tacked his clothing, skin, and underlying fat tightly to his bone.

I scribble on the chart, hand him a requisition, and send him to x-ray.

Ten minutes later, we’re looking at the pictures together. “It’s like the gun was right against your leg when it fired.”

“It was. It happened so fast. I was walking, and I guess I lifted my leg and dropped my hand at the same time. The gun banged my leg and I felt a sharp pain just above my knee.”

I look closer at the picture. “Is that a barb?” I say.

“There are two barbs,” he says. The barbs are tiny hooks on the nail that are meant to keep it from moving. They’re great for decks, and can help them keep their stability for years. They’re not so great for bones.

“We’re going to have to put you to sleep to take this out.”

He’s relieved when I say this.

This is a foreign body – something stuck in a place where it shouldn’t be. I’ve seen dozens, maybe hundreds: Nails pinned into legs. Lego wedged up nostrils. Batteries in the gut. A coin lodged in the trachea. Earrings embedded in earlobes. Fish hooks in hands, or even worse, in the eyelid. And then, there are the common ones: splinters in fingers, glass in feet, rocks embedded in road-rashed legs, insects (live and dead) in ears, fish bones in throats. And then, those that sound like urban legends, but are actually true: battery-operated toys, pine cones, light bulbs, chubby markers, and a variety of other items – all found below the belt.

An entire month of medical school could be spent reviewing strategies for foreign body removal, and it still wouldn’t cover half of what is seen throughout a career in emergency medicine. Instead, the anatomy of the human body is studied head-to-toe and one of the Hippocratic Oath’s principles is used to guide removal of these objects: Do No Harm.

If a metal shaving, or splinter, has found it’s way deep into the body’s tissues, it’s often best to just let it be. More harm may be caused by digging after it than by leaving it in there. The same is sometimes true for bullets, and as such, these projectiles are often incidental, bright-white findings on x-rays done for other reasons years later. But for those items that are to be pulled from the body, the anatomy must be considered carefully:  that tree branch wedged in the groin might be embedded in the femoral artery. And pulling it out might have the same effect as yanking an axe out of a maple tree – and blood runs much faster than tree sap.

And then, there are the tools. I’ve never come across a medical toolbox equipped specifically for removing foreign bodies. What we have are suture sets, a few orthopedic tools, a Dremel and box of batteries, a dozen different forceps, and a few other items we can use to yank, pull, and wrangle items from the body. It would be great if I could use the back end of a hammer (the “claw”) to pull out the nail, but this isn’t a two-by-four; The force of the hammer’s lever-mechanism would be great enough to leave a dent in John’s healthy bone.

The only way to remove the nail is to put John to sleep, get a grip on the nail’s head, and yank it out.

John is put to sleep and the skin around the nail is cleansed. I try first with a small needle driver, but it won’t budge. When I pull hard, the needle-driver lets go and my hand flies back, my elbow almost striking the respiratory therapist beside me. We have two pairs of pliers, but their noses are too thick – the nail-head is flush against John’s skin and I can’t grasp it. Minutes pass and I’m getting nowhere. More anesthetic is given as John starts to rustle. I ask the nurses if they have ideas. Someone suggests wedging a flat-head screwdriver under the nail head and lifting it away – just a little – so I can get a grip. Great idea – but no one has a flat-head screwdriver. Someone finds a thicker needle driver. It has teeth and I’m able to grip the nail head. I twist and turn until it begins to move, and finally, after a couple of yanks, there’s relief. It’s out.

The contractor hollers to me up the stairs. He’s going for lunch. Minutes later, I’m downstairs. The nail gun is on the floor and the machine still plugged in. I approach it slowly, then grasp the cord and pull it from the socket swiftly. “Okay,” I call out to my son. “All clear. You can come downstairs now.”