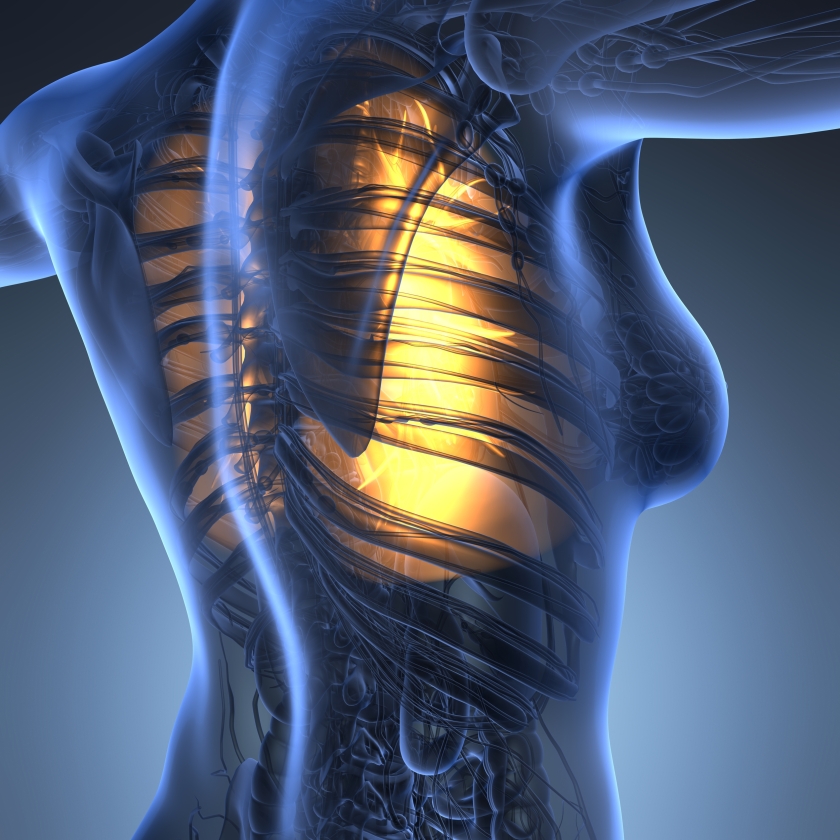 Jen* is fit, in her late thirties, and she’s in a wheelchair. I’ve seen her x-rays from the day before and I’m surprised she’s able to speak to me so clearly, so calmly. I tell her that I know the story – my assistant was here when she came in yesterday. It’s one of those cases that doctors and nurses talk about, around the x-ray monitor, and wonder whether or not they’ll let their kids out of their sight ever again.

I make a note and give her the requisition for her repeat x-ray. “I don’t know if this is significant,” she says. “But yesterday, when I went home, I went pee, and there was blood when I wiped.”

I palpate her abdomen gently. She’s sore on her left side, just below the ribs, but it’s difficult to tell whether or not the pain is coming from her ribs, or the abdomen itself. Six of her ribs on the left side are broken, and four of them are displaced fractures. One of her ribs is broken in two places. I check her vitals. Her blood pressure is a little low – ninety seven over eighty. The impact of the accident was great. There’s no reason to think that her left kidney escaped unscathed when the ribs that are there to protect it are shattered.

“You need a CT scan,” I say. “And a blood test. I want to make sure your hemoglobin is stable and that you aren’t bleeding from your kidney. I’m going to give you some IV fluids also – you’ll need an IV for the scan, and you’ll definitely need one if you’re bleeding.”

It’s busy. It’s the rush before Christmas Break. The ER is as clogged as airports will be in a few days. There are so many people here with the flu. In addition to these febrile patients, I see a woman with appendicitis, two young people with Cannabinoid Hyperemesis Syndrome, and an elderly guy who suddenly can’t walk (stroke). I know it’ll be a while before Jen’s CT scan is complete, but I tell Osler, my assistant, to let me know when the chest x-ray and blood results are available.

An hour later, I don’t even realize that I’m standing next to her, likely because she’s standing too, and with her injuries, I don’t expect her to be upright. Her hemoglobin, I tell her, is very slightly lower than normal. But she’d had a blood test in the past year and this is normal for her. Her x-ray is also reassuring. Of course, the broken ribs are still there, and it’s only been twenty four hours, so there’s no healing yet. But, the reason she’s here is to make sure that the small collapse of her left lung hasn’t worsened. It hasn’t. In fact, the lung has re-expanded a little.

“So do I really need the CT scan?”

“Yes,” I say. “If you had blood in your urine, I need to make sure that your kidney isn’t injured.”

Two more hours pass before the scan is done. When I reassess her, her husband is there. He is like her: youthful, fit, and easy-going. I tell them that the CT showed no injury to her kidney. He jokes and asks for a medical report, so that he can take custody of their kids. This will never happen; the accident happened because, like most moms, she’s willing to do almost anything for her children.

“You should come back and have another x-ray, to make sure the lung is still re-expanding, and that things don’t go the other way.”

“Do I have to come back tomorrow?”

“No. As long as you continue to improve, you can come back in three days. But, if at any point you start to feel worsening pain, or shortness of breath, just come back.” Just as they’re about to leave, I ask them where the accident happened.

“Close to home,” the husband says. They live about five miles north, in a new subdivision. He tells me the intersection, but an hour later, I’ve already forgotten the street names.

Three days later, she’s back, but for the first time since her last visit, she’s having trouble breathing. “Not really short of breath,” she says, “just like I can’t take in a deep breath.” She’s also pale, and in much more pain than the previous two days. Once her x-ray is completed, my colleague, Dr. Chaneggy* tells her that lung collapse has worsened, and that it looks like there is blood pooling around the bottom of the lung. A blood test will show that her hemoglobin has also dropped – by about thirty points – to about 75% of its original value. He’ll have to put a tube through her skin, between two ribs and into the space outside her lung. This will allow the air (that’s leaked out of the punctured lung) to escape (through the tube). This trapped air is compressing the lung and once it’s out, the lung will be able to do what it wants to do: re-expand.

It’s the weekend before Christmas and the ER is standing room only. Many outside clinics have already shut down for the holidays. It takes several hours to get a bed, but eventually, Jen is sedated and my colleague inserts the chest tube successfully. She’s admitted to the hospital’s surgical unit, monitored closely, given analgesia, and, discharged on Christmas Eve.

Two weeks later, the tube is out, she’s breathing well, but she still has some pain. Overall, she’s much better. She has a follow-up visit scheduled in a week, along with an another x-ray.

It’s the second week of January and school routines have begun again. The Christmas Break passed so quickly, it seemed nothing more than a long weekend. I’m driving my twelve year old to hockey. It’s an away game, but we have to drop his little brother at a local rink first. We’re pulling out of the driveway when I realize that the little guy doesn’t have a booster seat. It’s only a three-minute drive, but if he’s going to take the time to protect every inch of his little body with armor before he steps onto the ice, then it only makes sense to arrive there safely. I stop the car, run inside, and grab the booster.

Twenty minutes later, we’re approaching the arena where my older son will be playing. We’re stopped at a light when I look at the street sign. “Hey,” I say. “This is the intersection.”

I tell him the story – about the woman who shattered her ribs and whose lung collapsed. I tell him about the chest tube. He winces. I tell him that these are the street names her husband mentioned weeks ago. We still have about twenty minutes. “Want to go find it?” I ask him.

“That’s a good question,” I say. “I had to ask the same thing. Apparently it’s a raised area of ground that’s built to separate two areas, for example, a housing division and a highway.”

It takes only a minute of driving to find it. As I slow down and pull over, both my son and I think exactly what Jen and her kids must have thought: what a great hill for tobogganing.

It was a sunny afternoon, just after school. Jen’s daughters wanted to go tobogganing, so she grabbed the sleds, packed them in a large black garbage bag, and headed for the berm. It had been wet in the days preceding, so the top of the berm was a slippery runway of ice. Jen steadied her nine-year old’s sled, and then let it go. It was a great ride, straight, and fast, right from top to bottom. The bottom, however, was too icy for her daughter to climb so Jen hollered down and asked her to wait. She’d come down and carry the sled back up. With her other daughter waiting atop the hill, sled in hand, Jen flattened out the black bag in which she’d carried the sleds. She lowered herself onto the bag, and pushed off, but the bag turned forty-five degrees, and she fell flat onto the projectile as it picked up speed and raced toward the bottom of the hill. Facing the sky, and jetting down sideways, she thought she was much closer to the bottom than she was, when her ride came to an abrupt, painful stop. “It felt like I’d been hit by a car when I hit the tree,” she says. The left side of her chest slammed into the tree trunk, breaking six of her ribs instantly.

“It could have been worse,” I told her. “I’ve seen skiers go straight into trees, torsos lined right up with tree trunks. I remember two deaths like that within a span of weeks one year. I also remember a guy, about your age, tobogganing with his kids. His head hit a fence, and he had bleeding in his brain.”

It was her daughter, running up from the bottom of the hill, who pulled the phone from Jen’s pocket, and called 9-1-1.

I turn to my son. “Isn’t it strange,” I say. “That you’re about to go to a rink, and put on hundreds of dollars of protective equipment to play on a flat icy surface? But when you go tobogganing, you’ll find the thinnest, fasted sheet of plastic, and become human projectile without so much as a helmet to protect your head.”

He pauses, starting at me, before he speaks. “What’s strange is someone letting a guy like you cut a hole in their chest to put a tube between their ribs.”

“Hmm,” I say, as I put the car in drive and head toward the rink.